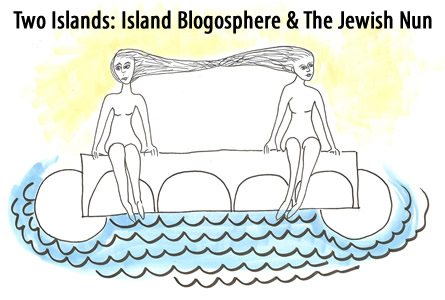 MIAMI:
PREMIERING IN MIAMI BEFORE GOING TO NYC AND SCOTLAND
Wendy White of the New Light Foundation, Inc. www.newlightgallery.org  and Vanessa Garcia of The Krane, Inc. www.thekrane.com are proud to present a performance of their new play Two Islands consisting of two one-acts entitled Island Blogosphere and The Jewish Nun. The play will take place on Wednesday, July 14 and Thursday, July 15 at GAB Studio 105 Northwest 23rd Street Miami, Florida 33127. Cocktails begin at 7:00 pm Curtain rises at 8:00 pm. The tickets are $15.00

NYC:
TWO FLORIDA PLAYWRIGHTS HIT NEW YORK BEFORE EDINBURGH FRINGE
Wendy White of the New Light Foundation, Inc. www.newlightgallery.org  and Vanessa Garcia of The Krane, Inc. www.thekrane.com are proud to present a performance of their new play Two Islands consisting of two one-acts entitled Island Blogosphere and The Jewish Nun. The play will take place on July 17 (2pm & 9pm) and July 18 (4pm) @ 59e59 (www.59e59.org) as part of the East to Edinburgh Festival. Tickets are $15 ($10.50 for 59e59 Members). Tickets can be purchased by calling Ticket Central at 212-279-4200 or online at www.59e59.org.

TWO WOMAN PLAYWRIGHTS ON THEIR WAY TO SCOTLAND (with a little help from their friends)!

Wendy White of the New Light Foundation, Inc. www.newlightgallery.org  and Vanessa Garcia of The Krane, Inc. www.thekrane.com are proud to present a special benefit staged reading of their newest production Two Islands consisting of two shows entitled Island Blogosphere and The Jewish Nun. The reading will take place on Friday, June 25, 2010 at the ArtServe Gallery located at 1350 East Sunrise Blvd., Fort Lauderdale, Florida, with a cocktail reception kicking off the event at 7:30. Curtain rises at 8pm.

Two Islands has an exciting road ahead as it will have its international debut at the upcoming Edinburgh Fringe Festival in Scotland this August 2010 followed by a run in Los Angeles and a return to Miami as a full-fledged production in 2011.

So, don’t  miss out --- be the first in South Florida to see Two Islands: The Jewish Nun and Island Blogosphere at Art Serve in Fort Lauderdale!  As above mentioned, the Fort Lauderdale performance is a special benefit performance. The proceeds raised will go towards getting the troupe to Scotland; covering the actors’ travel expenses and their stay in Scotland as they represent the United States, and South Florida specifically.

A bit about the plays:

This is the story of what happens when a young ABC (American Born Cuban) attempts to visit Cuba for the first time, but is prevented by politics and the sudden illness of a family member. Instead, she chooses to virtually befriend a group of bloggers that have been bravely blogging out of Cuba. It is as much a political story as it is a deeply personal journey into the heart of love, family, and, ultimately, what it means to be Cuban in the 21st century – a century that seems to be on the cusp of opening up an island that has been locked from the world for far too long.

The Jewish Nun’s self imposed celibacy during an era of free-love propels her into a hysterical journey of close encounters of every kind – only to be punished by puritanical family members and cast out of society – an honest portrayal of the coming of age in an era of labels and tribal conformity filled with reckless abandon, amorous explorations and a momentous struggle between religious purity and the temptations of love and sex.

Apart from being politically and socially relevant, the show is also fully produced, directed, written, and acted by women. Two Islands will, however, appeal to both men and women – the themes are not related to women alone. Our choice to have women spear-heading this venture is important because The Krane and New Light wishes to bring significant female roles to the fore and out into the world.

“Two Islands is truly a dream come true – an opportunity to explore a lifetime of romantic temptations and transform it all to the written word – it is truly an honor and a constant source of inspiration to share this creative adventure with the very talented playwright and artist, Vanessa Garcia and our charismatic actors Casey Dressler and Nicole Garcia – what a dynamic team we are!” says Wendy White, Playwright, Director and President of the New Light Foundation, Inc.

“I feel like taking theatre to the global level is part of our mission, starting at home, and moving abroad really showcases what’s here in Miami to the world. It’s important. It’s also important because it creates an exchange. I’m sure we’ll meet people abroad that we can then bring to Miami to further culturally infuse the local community – what we’re doing is starting a conversation,” says Vanessa Garcia, Founding Director of The Krane, Inc.

*
We would be honored for everyone to join us at our benefit performance, but there are those that won’t be in Fort Lauderdale that evening, we would welcome your donation via check or via our website: www.newlightgallery.org via the secure Pay Pal website.
If you would like to make a contribution via check, you may send your donation to: The New Light Foundation, Inc. c/o Wendy White 6000 North Ocean Blvd., Suite 14C, Lauderdale by the Sea, Florida 33308.
Be sure you write a note that says, "Help Send the Actors to Scotland!  Upon doing so, you will receive a letter back from us noting that your donation is tax deductible. Make your check out to: New Light Foundation, Inc OR Krane, Inc. Call us if you have any questions (305-450-9931).
Please visit our websites (listed below) for more info! Thank you for supporting the arts!