SHAKE IT UP:  You Thought You Knew Shakespeare? Think again…

He was not of an age, but for all time!
-Ben Jonson [on Shakespeare]

On Friday Nov. 20, 2009 at 6:30pm at AE District (3852 N. Miami Avenue in the Miami Design District) --  The Krane (www.thekrane.com); The New Light Studio/Gallery (www.newlightgallery.org);Schnebly Redland’s Winery (www.schneblywinery.com); AE District (www.aedistrict); and The University of Miami Masters Program (http://www.as.miami.edu/english/creativewriting) will join forces to bring you a night of cocktails and monologues called SHAKE IT UP:  a series of original monologues that turn Shakespeare on his head. As it should be: bawdy, brilliant, and beer-guzzling – this is Shakespeare with a 21st century twist, performed by Miami’s hottest talent.

The show will be located at AE District – a happening Concept Space whose mission it is “to provoke and inspire self-expression,” says AE’s director, Max Pierre.

Tickets ($15) can be purchased at the door or in advance by calling The Krane at 305-450-9931. For those $15 you not only get a night of theatre but an open bar as well –a cocktail opening reception sponsored by Schnebly Redland’s Winery from 6:30 to curtain. Curtain rises at 8pm sharp.

What it’s all about:

A group of writers from Miami, New York, Atlanta, and other cities around the U.S., were given a prompt and told to write a new, contemporary monologue inspired by that prompt. From those submissions, a jury selected the best monologues for performance.

What the writers didn’t know was that the prompts they each received were lines or phrases from within Shakespeare’s body of work.

The result: SHAKE IT UP – a mixture of timeless themes spun with a good dose of 21st century mess, fun, quirkiness, and drama. Pure poetry united under the umbrella of The Bard, without the thous and thus’s.

“What we wanted to do was not only to turn the “idea” of Shakespeare on its head,” says Vanessa Garcia, Director of The Krane, “but also to get at the core of Shakespeare, paradoxically. Back to a time when theatre actually moved people because it was for the people, for everybody, not for some strange, self-proclaimed upper tier that is used to paying 80 bucks to go see a show. Nope, our show is 15 bucks, it’s more democratic, it's smart, funny, original, and, the best part is that we are showcasing Miami’s talent. We’re very excited about it.”

“It is amazing what can happen when you write from the heart…The honesty that is revealed in “Shake it Up” promises to transform your [night] in such a way that Shakespeare would surely be proud,” says Wendy White, Director of New Light Studio/Gallery.

We don’t to give to much away, but what you’ll get when you come see the show are monologues performed by The Krane and New Light Studio/Gallery’s phenomenal troupe of actors and written by well-known, well published writers, and emerging writers alike. Don’t take our word for it; just take a look at the list of the monologues that will be performed.

Cuban Girls Don’t Go Away to College by Chantel Acevedo (Winner of the 2006 Latino Literacy Now Award and author of Love and Ghost Letters. (www.chantelacevedo.com) 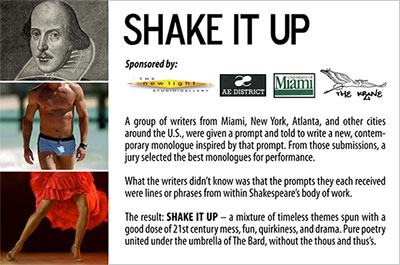 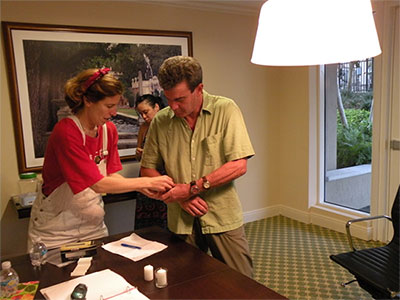 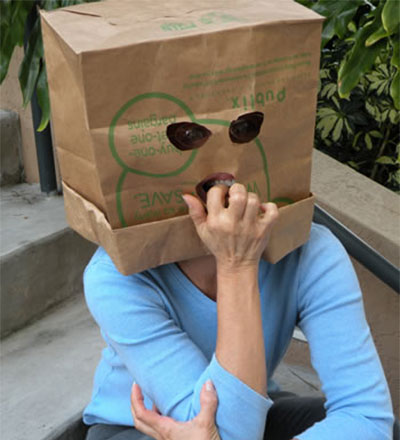 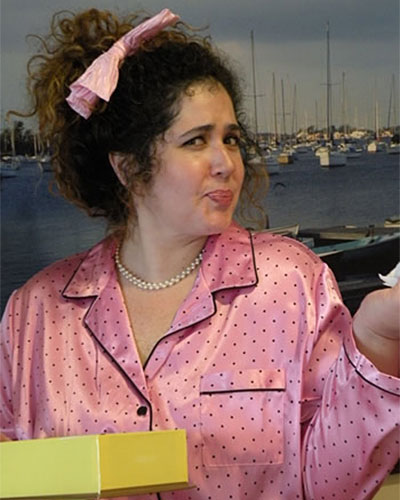 Lizards in Love By Wendy White (Playwright, Artist and Director of The New Light Studio/Gallery and co-founder of the New Light Foundation www.newlightgallery.org
a non-profit Corporation whose mission is to provide arts, education, and cultural community outreach.)

The Winds of Change by Samantha Phillips

The Ides of March by A. Manette Ansay (Author of Good Things I Wish You and Oprah Book Club Pick Vinegar Hill www.amanetteansay.com/wordpress)

Buying Time by Meredith Danton (Editorial Director for Communications and Marketing and part-time MFA student, both at the University of Miami)

Super Girl by Vanessa Cutler (Graduated in 2008 as a James A. Michener Fellow from the University of Miami. She is currently studying Medicine).

Red by Vanessa Garcia (Freelance and Fiction Writer, Playwright, and Director of The Krane www.thekrane.com, a non-profit organization dedicated to bringing meaningful theatre to Miami and beyond.  www.vanessagarcia.org).

Please Direct All Press Queries to Vanessa Garcia – 305-450-9931 Or email her at: contact@vanessagarcia.org OR vgarcia43@yahoo.com. She can put you in contact with any and all of the sponsors and/or writers you wish to speak with, as well as the producers and directors of the show.

Press for Shake it Up:

Shake it Up: You Thought You Knew Shakespeare? Think Again…
Everitas (News for the Faculty and Staff of The University of Miami)
Listing posted Oct. 30, 2009
Read Click Here

**Also Listed on Majic 102.7’s website  and Sweat Records, among many others.