PARKED: A play that will take you from Parked to 80mph in three dialogue-seconds flat

On Sunday, December 27, 2009 at 7pm at Just the Funny Theatre (3119 Coral Way Miami, Fl. 33145. http://www.justthefunny.com), The Krane (www.thekrane.com) brings you a play called PARKED, written and co-directed by Vanessa Garcia; performed and Co-directed by Nicole Rodriguez and Nicole Garcia. 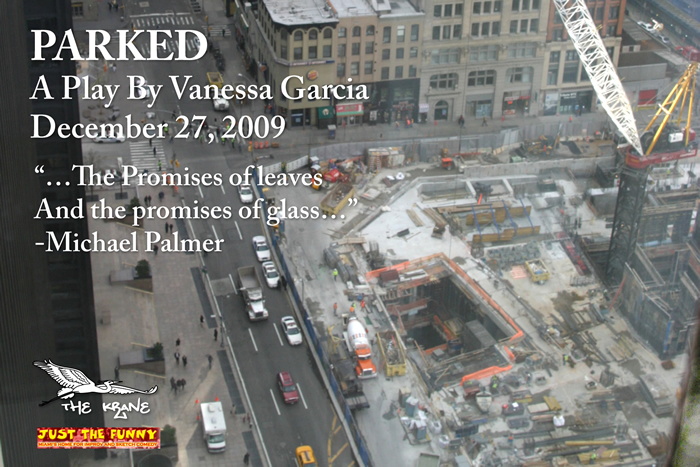 Tickets are $15 and can be purchased at the door. For more information regarding tickets, please call Vanessa Garcia at 305-450-9931. Space is limited. Concessions will be served.

Parked is a play in one act about two architects, Luke and Lorena, friends from childhood, who find themselves faced with the challenging project of designing a park where every other business and architectural venture has failed. As they reach their deadline of 48 hours, pieces of their lives, untold to each other prior, begin to unfold and they grow towards a new intimacy until the final climax of the play where the question stands: will they grow closer still or will a newly created rift between them go un-repaired.

On one level this is a story about love, on another it is an allegory for global and political tensions, such as that between Israel and Palestine.

“I wrote this play right after the Twin Towers came crashing down. I was there, in New York, living in Manhattan at the time, for days the smell lingered, for weeks and maybe even months actually. And before I knew it, I was writing this play, which is very much about reconstruction. It makes sense that it came out of 9/11,” says playwright Vanessa Garcia.

Garcia is not the only one that believes in this play. Parked has been awarded several honors. In 2007, the Arkansas Repertory Theatre (www.therep.org) awarded Vanessa Garcia a two week residency entitled Voices at the River to workshop this play. Later, the play was invited to travel to the Netherlands for an American Theatre night at The Chameleon Theatre in Amsterdam. Now the play is back in Miami.

“The production will be simple, two actors, minimal props, and the audience, the way theatre once was. Actors and dialogue, engaging an audience, stirring their emotions and returning them to the world, changed…I think that has real power,” says Vanessa Garcia.

The actors have come all the way from Los Angeles to perform the play. “I believe in this play, I would travel anywhere for it,” says actress Nicole Garcia. “It’s an incredible vision,” says actor Ozzie Rodriguez.

The performance is just one night, but The Krane hopes that the play will be picked up by a Miami playhouse for a longer run.

A Bit About the Actors:

Ozzie Rodriguez has worked in the entertainment business for the past 8 years.  He has worked in numerous theatrical productions from The Threepenny Opera to The Country Wife, and has also worked with The Krane on such shows as Cloudcuckooland and Miami Vignettes.  He has played character roles in independent feature films such as My Life:Untitled, Jarring, and Escape from South LA and recently worked on television shows such as Operation Repo and 1,000 Ways to Die.  He has also been featured on many national commercials for Dr. Pepper, Toyota, AT&T, MTV Tres, and more.  Today, he is branching out into screenwriting and production in Los Angeles, where he will be co-producing a self-written film called "Elevator".

Nicole Garcia is the Assistant Artistic Director of The Krane. She is a graduate of the Drama program at Loyola University; the Lee Strasberg Theatre Institute in NYC; the Hangar Theatre Lab Company in Ithaca, NY, and has also worked with New Dramatists in NYC. In Miami, she has worked extensively with The Krane; with Fantasy Theatre Factory in a production of The Neverglades, where she played Piggy and Sneezy. She has also worked with Mad Cat and the Actors Playhouse as well as other theatres across Dade County. At the Hangar Theatre, in NY, she played Gollum in The Imaginary Cuckhold; Evelyn in The Shape of Things and Ramia in Gallathea. She currently lives in LA, where she’s working on breaking into TV and Film.

Please Direct All Press Queries to Vanessa Garcia – 305-450-9931 Or email her at: contact@vanessagarcia.org OR vgarcia43@yahoo.com. She can put you in contact with any and all involved in the production and performance of the show.

PARKED
By Vanessa Garcia (www.Vanessagarcia.org)
Produced by The Krane
Performed by Nicole Garcia and Ozzie Rodriguez