Kick Up Your Heels Even In a Recession

“I'd make a wonderful Lady Macbeth. I'll wear a pair of platform shoes or something.” Bette Midler

SHOES & A SHOW: MIAMI VIGNETTES
Kick Up Your Heels Even In a Recession

In order to put the show together, The Shoe Store (www.theshoestoreinc.com) joined hands with The Krane Arts & Theatre Company (www.thekrane.com) and New Light Foundation, Inc (www.newlightgallery.org).

“We’re what happens when two artist sisters inherit their father’s shoe business after his unexpected death and make it their own,” says Nicole Garcia, an actor as well as co-owner and president of The Shoe Store. Nicole’s sister is Vanessa Garcia also co-owner of The Shoe Store – she is an artist, writer, and the director and founder of The Krane. It only made sense to bring their talents together at the heart of what had been their father’s passion, explains Nicole.

The Shoe Store sells a brand of what the Garcia sisters call “cheap chic” shoes (we’re talking designer styles for under 30 bucks!). On November 20, 2008 The Shoe Store initiates its new and continuing project called Shoes & a Show. And, when the curtain goes down, it’s 15% off all merchandise (shoes and handbags), including the art that hangs on the walls.

For “Miami Vignettes” writers Vanessa Garcia, Wendy Whiteand Megan Roth were given two instructions for the plays they were to write: they must be shorts (each vignette is between 10-20mins long) and the plays must have something to do with Miami. The Result: Property Management; 5 Temps in a Closet – Foreclosure; and Around the Block.

“Property Management’ is written by Vanessa Garcia. Here, Garcia analyzes the true nature of what belongs to us as people. Involved in the cast of characters are a war photographer named Fife who is going through Post Traumatic Stress Disorder, a Pregnant Property Manager named Jo who manages a building overrun by gangsters, and finally an Escort named Maca, who wishes to get out of prostitution and start a cake business instead. The play takes place almost entirely in a single room and is what happens when these three characters come together, ultimately saving each other’s lives.

Apart from being Director and Founder The Krane, Garcia is currently a Michener Fellow in the UM MFA Fiction program, as well as a freelance writer for various publications which have included: The Miami New Times; The Miami Herald; The Art Basel Magazine; Miami Magazine, Miami.com, NYArts Magazine, as well as numerous other journals, magazines, and newspapers. In 2008, she was one of three finalists, worldwide, in the Rolex Mentor Protege Arts Initiative. She has also won a scholarship to the NY State Summer Writers Institute and was recently published (in poetry) by Damselfly Press. For more information: www.vanessagarcia.org

“5 Temps in a Closet – Foreclosure” is written by playwright, Wendy White.  The playwright returns back to work and live full time in Florida after working two years in New York City, to learn that the only job in town is working at a foreclosure firm.  The drama is heightened by the desperation of her temporary co-workers who are forced to work in a closet to tackle the thousands of foreclosure files in South Florida. Meanwhile, the United States is on the precipice of Global Economic Disaster… Step into the closet to feel the pulse of the title resolution business as it tries to find a solution amidst the house of cards falling down.

Around The Block by poet and artist, Megan Roth, is also about “property” to some degree: intellectual property. The story of a writer, a girl and a boy. A seemingly simple story – until the characters escape from the narrative and we are all forced to ask the question of what it is that truly belongs to the writer, what belongs to the audience, and what belongs to another realm alltogether.

In 2007,  Roth became a coffee-making intern for a small book company, and then went on to co-author five nonfiction titles for Sweetwater Press. Her first book, The Green Guide to Daily Living, will be published by Cliff Road Books in November, 2008. Her poetry and prose have appeared in POEM, Elimae, and Opium magazines. Megan now serves as an assistant poetry editor for The Rose and Thorn Ezine. Megan is also an avid cartoonist and watercolor painter, and runs her own t-shirt business online at www.clikfish.com. Her artwork has appeared in QUAD magazine, and her cartoons have appeared in Defenestration and on various friends’ shirts, tote bags, and tattoos.

TICKETS WILL BE SOLD AT THE DOOR AND PRIOR FOR $7. DONATIONS ARE ALSO ACCEPTED FOR THE KRANE AND THE NEW LIGHT FOUNDATION AT THE SHOW OR BEFORE.

Press for Shoes & a Show: 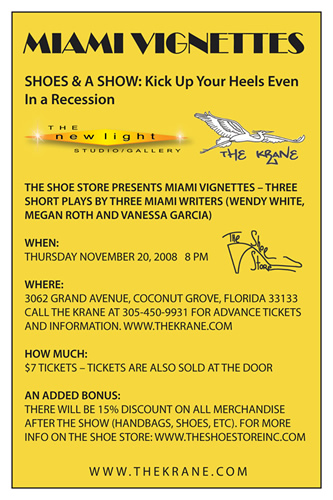