Introducing the revolutionary concept of LIVE performances in combination with the visual arts! A new concept introduced by Adam White, gallery owner and Wendy White, playwright and founder of the New Light Theatre. (no relation).   Following the successful launch of “The Jewish Nun” at the New Light Theatre at Gallery 101 – Wendy White is proud to present new plays representing all kinds of love!

The freedom to love is the theme of this production featuring new one-act plays written by Wendy White, Playwright and Co-Founder of the New Light Foundation, Inc. (www.newlightgallery.org) and Vanessa Garcia, Artistic Director of The Krane, Inc. (http://thekrane.com/)

THE PROPOSAL by Vanessa Garcia 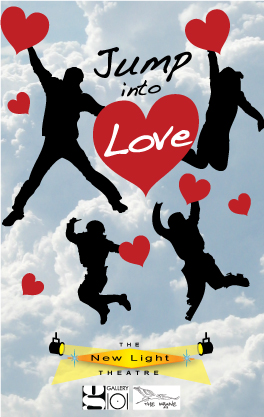 A young couple together for about 7 years are about to make one of the biggest decisions in their lives. The entire short revolves around their decision making process revealing their relationship, their issues, their love.

MARRY ME! by Wendy White
A one act play capturing the day - June 24, 2011 - when lawmakers in New York voted to legalize same-sex marriage, making New York the largest state where gay and lesbian couples will be able to wed. As a result, the passing of the “marriage bill” may double the amount of married couples in our country.

I WANT TO BE YOUR SCULPTURE by Wendy White
A one-act comedy portraying the challenge of love, art, marriage and sculpture.

Monologues and poetry will also be featured for a rapturous evening celebrating the freedom of love!

Adam White went to see one of Wendy's plays recently in Miami at Wynwood's GAB studio and decided to offer Wendy a permanent home in his Fort Lauderdale gallery surrounded by cafes, restaurants, boutiques and other galleries. "Wendy and New Light Theatre will be able to cast plays every month and have a solid home base from which to create. We are very excited to have her here; she is an immense talent that promises to get even bigger and better with this wonderful association” states Adam White, Gallery owner, Gallery 101.

“Jump into Love is all about Love! The freedom to love, to live, to be who you are;” states playwright, Wendy White. “Jump into Love celebrates new breakthroughs in our nation where men and women of all lifestyles finally have equal rights under the law. It is truly an honor to showcase “Jump Into Love” as the newest production at the New Light Theatre’s new venue at Gallery 101. Special thanks to Adam White, gallery owner and fine artist for opening his doors to us!”

"We Jump into love every day, every hour, every minute; sometimes we are aware, sometimes we're not. Sometimes it's the most wonderful thing in the world, sometimes the scariest and riskiest. Why not celebrate all of it -- the leap into the arms of someone we love, the sting that sometimes comes as a result of a heart open to love. Over and over again. Jump Into Love is an homage to all of it," says Vanessa Garcia, playwright and founding artistic director of Krane, Inc.

Krane, Inc. was named Best of the City 2010 by Miami Magazine, as the best up and coming theatre company in town. http://vanessagarcia.org/press/tethrical-chairs.php. Also in 2010, Vanessa Garcia, the Founding Artistic Director of Krane, Inc. was named one of Miami's 20 Under 40 by The Miami Herald for her work in theatre. In 2008, Garcia was one of four Literature Finalists, worldwide, in the Rolex Mentor & Protege Arts Initiative.  For more information about Garcia, please visit: www.vanessagarcia.org.

The playwright and director, Wendy White has written over 120 one-act plays and was a resident playwright, curator and director at the Kraine Theater in the East Village of New York City from 1984 to 1992, and at the Expanded Arts Theater Company from 1994 to 2001, in the Lower East Side of New York City. Her off-Broadway productions are the base for her new venue at the New Light Theatre. She recently produced The Jewish Nun to sold out audiences at the New Light Theatre at Gallery 101, in Off-Broadway’s 59e59 Street Theatre and at the Edinburgh Fringe Festival in Edinburgh, Scotland.

In 2009, New Light Foundation, Inc. represented the United States as Art ambassadors by the 1-2-3 Kinderlachen e.V. foundation of Rottenburg, Germany by hosting the international “Global Gallery” project (www.123kinderlachen.org). During the course of this important project, the “world’s biggest canvas” emerged; painted by children – transcending all borders and conflicts.

The New Light Foundation, a 501(c)3 non-profit public foundation, has won numerous awards around the globe, has performed everywhere from Amsterdam to Paris; from Miami to Los Angeles to New York City; and has tackled subjects relating to women, love, politics, and Shakespeare. More information about the writer and director, Wendy White can be found on her website: www.newlightgallery.org. Please visit: http://www.newlightgallery.org/paintingswendy/theater-resume.html