Drifting: A Theatrical Exquisite Corpse draws from the surrealist tradition of the exquisite corpse, a collaborative exercise using words and images to construct a figure or phrase. Girls' Club writer in residence, Vanessa Garcia, brings you the exquisite corpse in theatrical form -- for a night that includes dance, performance art, and more traditional forms of theatre. A multi-disciplinary feast for the eyes and head, inspired by the exhibition “I think it’s in my head,” curated by the TM Sisters. Garcia promises “This is art you will truly live through, not just look at.”

"The idea behind the performance," says Garcia, "is not only to take you through the exhibit, but also to see what's inside the head of some pretty amazing artists, all women working out of South Florida." These artists include dancer and choreographer Ivonne Batanero; multi-disciplinary artist Patricia Margarita Hernandez (in collaboration with David Brieske and Leonardo Valencia); writer Christina Frigo; director Nicole Stodard, Producing Artistic Director of Thinking Cap Theatre, Actors Carey Brianna Hart, and Sheri Allender, as well as writer and multi-disciplinary artist, Vanessa Garcia.

During the creation process, Garcia gave her collaborators a series of prompts. Each artist could only see and respond to the work that preceded it in the show, as they worked on their individual pieces. Also, the words: "I think it's in my head" had to appear in the pieces. The result is a series of 10-15 interconnected shorts (each titled as follows: Balloon Cocoon by Vanessa Garcia; I Think it's In My Belly by Ivonne Batanero; Twin Utero by Christina Frigo; and All My Friends by Patricia Margarita Hernandez, David Brieske, and Leonardo Valencia). "What's most fascinating is the way these pieces connect to each other and to the idea behind the TM  sisters' show as a whole," says Garcia.

Founded in 2006 by artist Francie Bishop Good and her husband David Horvitz, Girls' Club is a 501(c)3 foundation and alternative space, the only private collection in the world dedicated to exhibiting contemporary art by women. Cutting edge works in painting, drawing, photography and video are presented in curated, thematic exhibitions which also include works loaned from other collectors, and from galleries and artists. Artists represented in the Good/Horvitz collection are a diverse body of women - and some men - representing many ethnicities and nationalities. Girls' Club's facility is a dynamic, multi-functional building created by award-winning designer Margi Nothard of Glavovic Studio in Fort Lauderdale.

Girls' Club's mission is to educate the public, nurture the careers of female artists, and to serve as a resource for art students and scholars, curators, and practicing artists. A special commitment is made to expose the work of local artists to a broader national and international audience. Girls' Club's website features a working online artist database with biographical information and relevant web links on artists in the collection, facilitating further study on the works and careers of contemporary women artists. Web projects by artists, interviews and texts by writers and a blog extends the presence of Girls' Club onto the worldwide web. 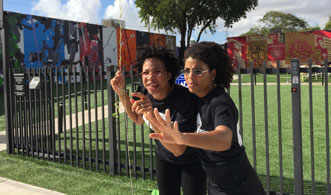 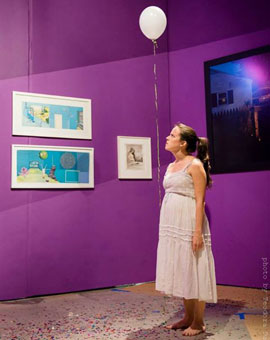 Ivonne Batanero in I think it's in My Belly 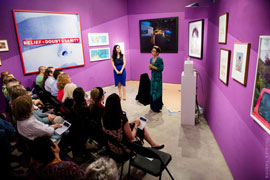 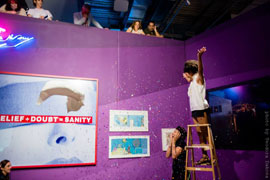 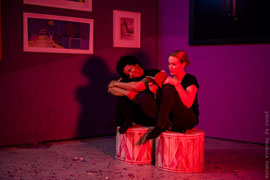 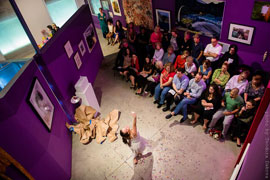 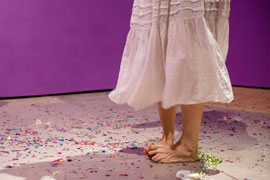 Ivonne Batanero's dancing feet in I think it's in my Belly 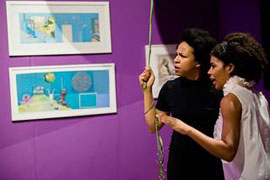 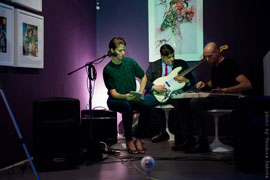